Google+
Written by Roger on Dec 6 2009 as uncategorized.

SADAKO AND THE PAPER CRANE

2005 is the 60th anniversary of the bombing of the Japanese cities of Hiroshima and Nagasaki, using nuclear weapons.

The United States military dropped an atomic bomb on Hiroshima at 8.15am on 6 August 1945. Another atomic bomb was dropped on the city of Nagasaki at 11.02am on 9 August 1945.

On the 60th anniversary of this act of terror, people around the world are saying “Never Again!” They are calling for nuclear disarmament by all countries that maintain stockpiles of nuclear weapons.

For children, one important international symbol of peace and disarmament is the paper crane.

The paper crane has become a symbol in recent years as a result of its connection to the story of a young Japanese girl named Sadako Sasaki, who was born in 1943.

Sadako was two years old when the atom bomb was dropped on Hiroshima on 6 August 1945. As she grew up, Sadako was a strong, courageous and athletic girl. In 1955, at age 11, while practicing for a big race, she became dizzy and fell to the ground. Sadako was diagnosed with leukaemia, "the atom bomb" disease.

Sadako’s best friend told her of an old Japanese legend which said that anyone who folds a thousand paper cranes would be granted a wish. Sadako hoped that the gods would grant her a wish to get well so that she could run again. She started to work on the paper cranes and completed over 1000 before dying on 25 October 1955 at the age of twelve.

In spite of her poor health, she never gave up. She continued to make paper cranes until she died.

Inspired by her courage and strength, Sadako’s friends and classmates put together a book of her letters and published it. They began to dream of building a monument to Sadako and all of the children killed by the atom bomb. Young people all over Japan helped collect money for the project.

In 1958, a statue of Sadako holding a golden crane was unveiled in Hiroshima Peace Park. The children also made a wish that is inscribed at the bottom of the statue and reads:

"This is our cry, this is our prayer, Peace in the world".

Today, people all over the world fold paper cranes and send them to Sadako’s monument in Hiroshima. To send a thousand cranes to the Children’s Monument in Hiroshima’s Peace Park, string them on garlands of 100 cranes each, and mail them to: 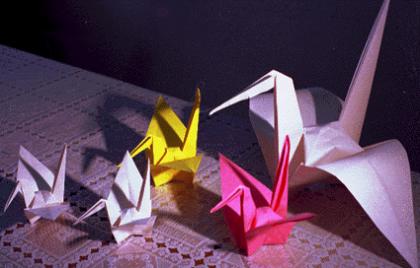 How do you make that?, nice.

Well, when you’re 11 and people are saying that you’re going to die, you start losing interest in things...

ohh yes i do like the punctuation in my name :D

And that story is very touching D:
I heard of it before, just not all the details.

It seems like a lot of work though, to make 1000 cranes and string them on garlands..