This is Notes.app, which I use to save rich text and organize ideas. I like it because it’s not a website, it’s a native OS X app. And because it opens in a small window that fits on the side of the screen, I feel creative and comfortable writing notes here. 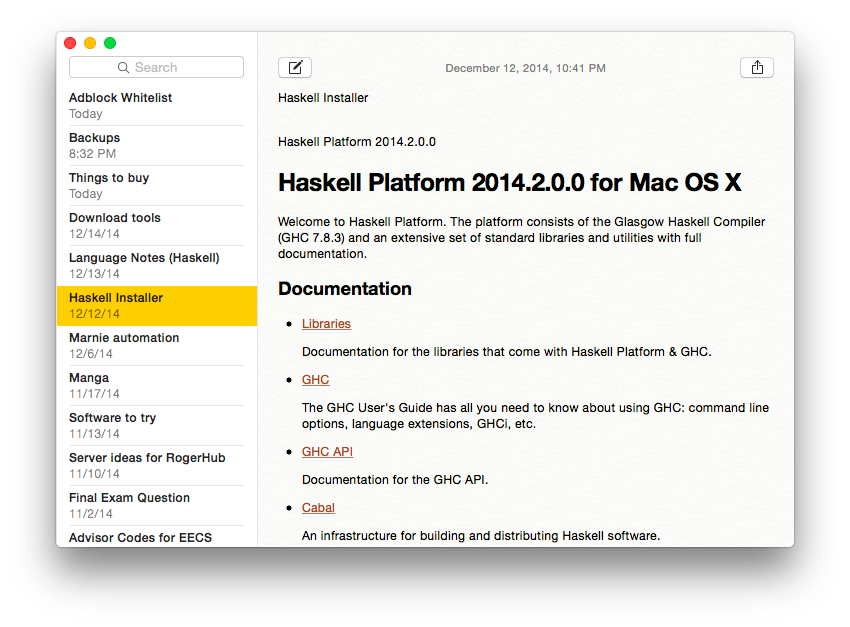 But it doesn’t sync with my Android phone. It only syncs with an iCloud account, and I don’t use iCloud for anything except iTunes purchases and this. It’s also a little buggy with too much rich text.

I use vim for all my text editing1, and I wanted to use vim for notes too. But it didn’t work out. Rich text lets me put in checkmarks like ✔︎, and I can start bulleted list with wiki-style syntax. There’s a font color palette, and you can paste images and headings into it directly from Safari. I have a ton of places to write stuff, but this one is my favorite.

I also tried Google Keep, but the mobile app is so clunky and there’s no native app. The web interface is awkward too. I don’t like sticky notes. They feel like a lazy way to make reminders.

I guess I’ll never be able to see my notes on my phone, or edit my todo list with a native OS X app. It’s the end of the semester anyway, so my todo list is getting shorter and shorter.