Google+
Written by Roger on Dec 5 2010 as uncategorized.

It’s raining right now. I was thinking how nuclear fallout can cause rain and stuff and then I thought about nationwide programs for this sort of stuff and then I thought about NASA and their publication about the bacteria that incorporate arsenic into their organic molecules. Did nobody else notice this? A few months ago, Obama cut NASA’s budget, forever destroying the dreams of 10-year-old astronauts. Then, NASA spent a ton of money trying to get public attention, spreading rumors about them finding organisms that completely redefine what we consider to be organic. I thought they had silicon-based life or something they found on another planet. But arsenic from Mono lake? Big whoop. Maybe that’s important to some people, but anyone would guess that this is NASA’s sucking up to Obama so that he’ll give them more money. Oh, you know what, I think I’ve been to Mono Lake before. Maybe I’ve got some pictures. Oh here look: 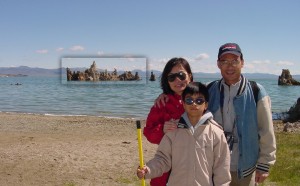 Compare the picture to this. Same rock formation and all right? I think this is Mono Lake. My memory’s hazy but theres a Mono Lake magnet on the refrigerator and my parents seem to remember. Heh it’s kind of cool, this is like CSI but with my past.

and you were studying.. i think.

Our professor in biochem actually put up the article about this in our lecture slides.. he was fascinated with the experiments. It’s not just that it’s cool b/c Arsenic is usually poisonous. It can be incorporated into DNA, replacing the phosphorus DNA backbone.. which is pretty legit. Nice picture btw.. wtf was I?