Google+
Written by Roger on Dec 3 2009 as uncategorized.

Sadly, a lot of things tick me off. Here are my top 5

Billboards, signs, anything that can be read. Someone just has to read it aloud. It’s not like I’m illiterate. Are you reading aloud billboards because you want me to pay attention to them? If you want to point something out, just gesture towards it instead of mocking my intelligence and reading it aloud.

Not everything is meant to be a debate. If you don’t agree with me about something, just tell me. But if the conversation goes on for more than 2 or 3 sentences, just drop it.

Some people take their opinions way to heavily. It’s great to stand up for what you believe in, but don’t argue about trivial things and subjects that aren’t important.

"Hey, on RogerHub I’m thinking about making a music player where people can listen to music that I put up. Maybe I’ll have a repeat option or something. And people can request songs to be put up there. I’ll just have the music stream from YouTube so I don’t have to pay for the bandwith. Do you think it’s a good idea?"

Are you serious? Did you press the SEND button too early? I spent like a whole 3 minutes typing up that text, and you just reply with half of a word. "Yea". I know that I didn’t leave many topics for a continued conversation, but at least give me more than one measly word.

If you’re busy and you don’t have the time to type up a complete sentence, don’t text back at all. (Normal) People don’t spend their whole lives on the phone texting. (Unless you’re really really bored.) It’s understandable that it could take hours for a reply, but replying with a single word is just insulting.

You’re basically telling the other person, "I got your text, but more important things concern me at the moment. I don’t appreciate you taking the time to share your ideas and I don’t care about you enough to ponder it for more than 4 seconds. I am replying with a single word, both so that I don’t have to remember what you told me, and so that you wont think that I reply slowly. I am purposely leaving no room for further conversation so that you can quietly leave my life. Good-bye."

When you’re little, you naturally have a lot of stamina and you tend to work it off by shaking your leg. But seriously, leg shaking is very very annoying to whoever is sitting next to you.

If you have so much energy that you can’t stop yourself from shaking, go run a mile. Still have energy? Go run another one. Go run 10 miles. Keep running till you’re too sore and tired to shake your leg anymore.

The nicer and more practical solution is to just control it. Keep reminding yourself to stop shaking your leg and the habit will disappear.

To illustrate this one, I will be using this comic: 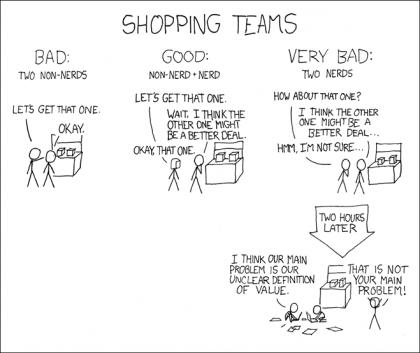 If you’re going to tell other people something, make sure that you know what you’re talking about. You wouldn’t believe how quickly false information can influence people.

Back in Elementary School:

"Computers have something called IP Addresses"

"IP Addresses are unique, so you have to keep them secret."

"If I know your IP Address, I can overload your Power Supply and blow up your computer.

I’m not even joking.

People left and right were claiming that they blew up their enemies’ computers because they found their IP Address.

Yeah, this is pretty common amongst 8-year olds, but now, people should be old enough to research things before sharing information.

So, I’m not saying that I’ve never done any of these above things (Because I have). << Wrote that to satisfy any complaints from Kenny

i hear you.
i seriously do.
especially the leg shaking part.
some guy sits in front of me in english, and he ALWAYS SHAKES HIS LEG and i used to sit in front of HIM and..yeah >_>

I’m gonna add something to the list:
Using More than 1 Question Mark.

Oh yeah, by the way, YOU KNOW MY IP ADDRESS... CRAP DONT DESTROY MY COMPUTER =(

And... just to point something out, thats exactly what lead to me responding to the hoofprint article concerning Windows 7.

Woops, wrote a reply that is might be too long! >.>

Yes, I’m pathetic... nothing to do at the library.