Google+
Written by Roger on Dec 8 2009 as uncategorized.

So, in English, we had to do a persuasive speech where you and a partner would take opposite sides on an issue and debate about it.

I ended up arguing about something that most people don’t pay attention to: Meat.

Yeah, everyone eats meat. Well, except for those select few that have realized the truth.

Meat itself isn’t bad for you or the environment. But the processed and manufactured meats that we all eat today cause huge problems in the world.

First off, it’s been proven that vegetarians are healthier and live longer than normal people. And if you think about it, it makes sense.

Vegetarians aren’t all skinny and malnourished like you think they would be. Most vegetarians are actually healthier and more fit than the majority of the population.

And yes. Even though you avoid meat and pills, you can still get all your nutrients that you need. Minus the hormones and carcinogens of course.

Well, enough about you. Because there are more problems with meat-eating than health-related ones.

The KFC that you had yesterday night didn’t come from a traditional red barn on a farm in Oregon. (there, i changed it. happy?) Instead, that chicken probably grew up in a factory like this: 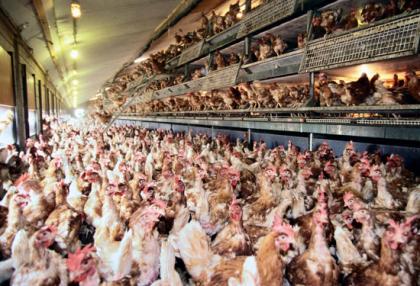 (Yeah, try to get that picture out of you head.)

I was reading an article in Discover Magazine about a new way to calmly kill cows. The cows are loaded on to a convener belt and a automatic gun shoots bullets through their skulls as they pass by the checkpoint.

It’s really not a pretty sight. (If I can find the article again, I’ll post a link here.)

Farm animals are fed foods laced with all the hormones and drugs in the world. If a cow can grow to optimal size in 50% of the norm, that’s a 2x profit gain. Why be "organic" when you can be rich? Yeah..

And another thing. Animals eat a lot. For the one pound of beef in your cheeseburger, 16 pounds of vegetables and 1000 gallons of water was used. Yeah, there are lots of charity efforts to send food and water to 3rd world countries. But if people stopped eating meat, there would be enough vegetables in the world to feed everyone ten times over.

So, after an animal eats, where does the poop go? Well, it goes strait into our rivers and oceans. Why bother cleaning the waste when you can just dump it by the ton? Yes, I mean ton. Farm animals produce over 40 tons of feces every second. (Something to think about next time you’re constipated on the toilet.)

And global warming. Scary right? Well meat-production actually produces more CO2 emissions than all the cars/trucks/planes/boats in the world combined.

Yeah. There’s a lot more problems about meat-eating. So why doesn’t anybody stop eating meat? 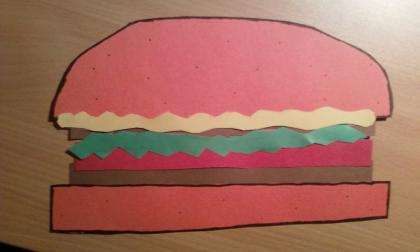 And here’s a cheeseburger for you to look at. :)
The buns are actually more orange than the look.

So, a vampire and a human had a kid, and here she is:

You can tell it’s a mix because she’s only semi-transparent in this photo.

I voted for your speech Roger :)
Guess who? ^^
Unfortunately I eat meat too

yummy, Cheeseburger. I love chicken too.