Welcome back reader! I’ve been gone for more than a year, and a lot of things have changed. I haven’t stopped blogging. I was just scared off of this blog, because of all the visitors spilling over from my calculator page. So, I made four or five other blogs so I could write without wondering how many strangers were going to read the posts I wrote.

Here are some things that have happened to me since September 2013, to get you up to speed: I got an offer last December to be a TA for a class at my university, which meant a 20-hour commitment and lots of cool perks. I was in San Diego visiting a friend when I got the offer (it was past midnight during winter break). I was almost going to reply immediately and turn down the offer, because even though I had really wanted to be a TA before1, it sounded like way too much work on top of everything I already had scheduled for the Spring semester. Besides, I had already agreed to be a reader (less work, less cred) for another class. My friend convinced me to sleep on it instead, and the next morning, I woke up and told the professor I was interested, but already committed to the reader position. Things kind of settled into place after that, and I became a little sophomore TA.

Before my first discussion section, I was really nervous. I made a slideshow and everything to introduce myself and try to give a couple of tips for succeeding in the course. When I took the class, I went to every single lecture and made sure I stayed on top of the material. I never went to discussion though... My discussions were always pretty small. I think that was because I was inexperienced and also that my sections were at really inconvenient times. As for the few people that showed up every week, I got to know them pretty well. I did a lot of work on the 3rd project, which was fun because I got to support that assignment from start to end. I took the pedagogy course that new TA’s all take. They talk about some of the research about teaching and learning and all of the techniques that come out of those. Once I heard about some of those techniques, I started noticing them from my own professors and TA’s. I could also spot when a TA was making mistakes and breaking all the rules, and it really did make a difference.

I got sick a bunch of times, but I don’t remember all of those. I went through two birthdays, so I’m 20 years old now, which is kind of cool. Some time in October, I was going through my four year plan and I noticed I’d taken enough requirements and had enough units to graduate pretty easily in just 3 more semesters. I had 5 more upper division CS classes to take and 2 more humanities courses and 1 more requirement for my major. So, I decided I was going to plan to graduate in 3 years. I thought that I might change my mind as my last semester approached, but I did change my graduation year from 2016 to 2015 on my resume to make it somewhat official. I thought I was going to graduate early for a long time. I talked to my parents about it, and I told my friends about it. But I cancelled this a couple weeks ago, so I’m back to 2016.

I took a few unmemorable classes that semester. I got to know some of my friends better, since they were taking the class I was TA’ing for. I convinced some of them to attend my section sometimes, and we’d just have fun and I’d bring food on occasion.

I spent a bunch of time doing interviews for a summer internship last year. Job hunting took a long time, and I didn’t find an internship until kind of late in the year. I ended up getting offers from three companies, which is frustrating, because up until that first offer, it seemed like nobody was really interested in hiring me, and then suddenly three of them come in a week. I went to intern at Quizlet for the summer. All three really would have been pretty solid choices, so I sent these long apology emails to the other two places letting them know that I thought they were awesome too, but sorry! During the summer, I read a this big long book about a slum on the outskirts of Mumbai. The book was called Behind the Beautiful Forevers2, and I thought it was really ironic being in one of the richest cities in the world with all of these rich tech industry folks. I know that not everyone had a lot of money, but everyone sure acted like it.. and ate like it. I also thought a lot about those Japanese teenagers who left home to go to university in Tokyo and after that, worked hard to make their fare in a big place. I found a sublet on the west side of Berkeley, which I thought would be convenient because it was near the subway station. Turned out that the 45-minute commute every day was really tiring. The apartment I lived in was kind of old and smelly and in a poorer part of Berkeley. I didn’t really get along with my roommate, who lived a completely different lifestyle than I did. At work, I learned a lot about real infrastructure stuff. I picked up a bunch of lingo and got better at evaluating software and infrastructure.

This semester I’m a TA again. I think I’ve gotten better at it the second time around. I signed up for a business class about negotiations, to fulfill my first of 2 humanities courses. I didn’t get in, even though I was #2 on the waiting list since the start of telebears. But to be honest, I’m sort of relieved that I only have my 3 technical courses this semester, because they are more than enough workload for me. A bunch of my friends are also TA’s, which is cool, since we can talk about TA things.

I’m taking the operating systems class this semester, which is super cool, because we do our projects in 4-person groups, and working with my group is lots of fun. I’m also taking artificial intelligence, which I thought I would hate. But I actually think we cover a lot of cool material in that class, and I wish I had more time to really understand it. Finally, I’m taking computer networking, which is alright.

I bought a MacBook Air over the summer for myself. I also bought a big giant lens for my DSLR. It’s alright. I bought a 49-key USB piano keyboard, which I play sometimes with GarageBand. I bought a subscription to Adobe Creative Cloud for Photographers, which comes with Photoshop and Lightroom. I used Photoshop a ton for developing project 1 this semester. I also started using Lightroom to post-process all of my pictures. My MacBook is able to handle realtime editing and image exporting just fine. I didn’t skimp on the CPU and memory upgrades.

Things are alright right now. I looked at some of the things I wrote here in high school, and they sound really kind of dumb and don’t sound like how I would say them in real life. I think it’s endearing how blog authors adore their readers and refer to them. I still follow a lot of people’s blogs on my RSS reader. I don’t think they know!

Here’s me from a few weeks ago3, before I got my haircut: 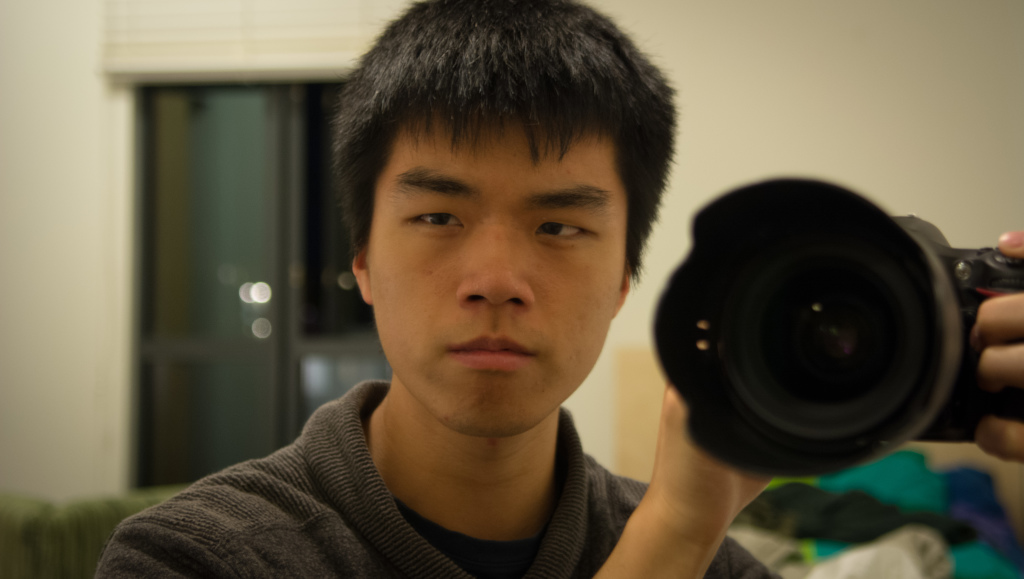 I might not write again for a long time. But talk to you again soon!

WOw man, youre such and inspiration to me. I love yu and want your body. That new hairscut it astonishing and I love you. ROGER CHEN 4 LIFE

Want to see you after haircut !