Google+
Written by Roger on Nov 22 2010 as uncategorized.

Giving up is just the stupidest thing ever. When things get to this point of sub-zero mediocrity, I really cannot do anything but sit, watch, and contemplate how something so stupid can happen. And now I’ve got it. There are two reasons why people give up, and only two: The first involves complaining, whining, basically a massive display of inferiority. The second is simply that you come to realize that the endeavor isn’t worth the time. I’ve got a ton of the 2nd one, and believe me, it’s much worse.

I’ve been sorting through my old stuff and failure reason #2 is written everywhere. It’s one thing to know you’re lacking fortitude and perseverance. Laughable, but not as bad as stupidity. I’ve got projects from games of snake to equation solving software to webcam chat programs to online question/answer forum software to video/audio converters to blogging software to photo sharing software to collaboration software to typing benchmarks to a program that’ll talk with you to a program that rates how attractive you are. And they’ve got one thing in common: I never finished them. Holy crap, I never finish ANYTHING. Even the software that I released wasn’t finished, I just settled. Settled for the piece of crap that came out because the time and effort needed to build a finished product was beyond what I had. Boggert wasn’t finished, no there were a ton of things I had planned for it that I never added. The NHSWeb software that runs WalnutNHS.com had a lot of stuff in the original plans that never got put in. I like to think that I have a lot of perseverance, but my record so far doesn’t reflect. I don’t ever quit from reason 1 but 2 just ends everything I make. Now I look back and see these thousand-line mini-projects and wow I had a ton of progress on these projects that will never be finished. Effort-wise, IB is really not much compared to programming. Because of IB, I’ve dropped my programming projects for the most part and I’m not starting any new ones so it’s really been balanced out. But I wanted to release some of the projects that are actually functional before they disappear from the indices of my file system.

(No warranty whatsoever incase you hurt yourself downloading some of these.)

1. Snake
This was made in VB.net and took around a day to make. I distinctly remember it was a Saturday and I had nothing to do. From the meta data, it was July 11 2009. I should have chosen a better platform, but this was probably the most completed of all my projects. Very sad, right?
Download

2. RogerAVC
An video converter written in VB.NET powered by FFMPEG. Thus, the title. Didn’t turn out so well because, well, I didn’t know much about video editing in the first place. Also, there are alternatives and I suddenly had other things to do (spanish bleh). Gave up April 23 2010. 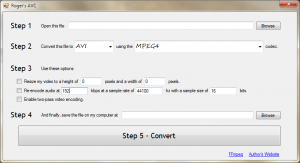 What a great UI right? Though it doesn't work.

3. Equation Solver
Completely useless. I have no other words for this program. It’s got nothing that my casio can’t do. Built July 5 2009.
Download

4. Photowall
This was my first photo-sharing software. Very crappy, to say the least. I hosted it for a while on an apache box I had setup at home. My parents and grandparents would share the most random family pictures on it, and overall, I don’t even know. People are easily amused. Built in PHP/MySQL and contains everything in the ZIP. It’s fairly finished, albeit completely pointless. This took a few days. Finished March 6 2009.
Download

5. PHP Photos
My 2nd attempt at photo-sharing software. More complex with directories, password-protection, administration control panel. However, still very pointless, useless and replaceable. At the very most, it was a good lesson about directory permissions. Built in PHP/MySQL and contains everything in the ZIP. This went though a few revisions. Last revised December 9 2009.
Download

6. rogerLive
Intended to be like a conference chat room (video/audio/text) but I realized that NAT penetration was too tough and the bandwidth requirements put the project out of my capacity. So, it just ended up being like a mirror, which sparked the idea for another one of my failed projects. Written in VB.NET and there’s no real release or functionality that has any purpose whatsoever. No release here. Gave up August 8 2010.

7. theMagicMirror
This project sprung up from the last one, rogerLive. It rates the proportions, tone and shape of your face to determine your attractiveness. No huge obstacles until I got to the actual analysis part.. then I drew a blank. The UI is pretty good and the webcam function (taken from another open-source proj) works as a mirror, so you can use it for that, however impractical. Analysis is very minimal and scoring system is fake (placeholder, you’ll get the same score every time). Built mainly in JavaScript with flash components. No PHP whatsoever. *gasp* No  idea why I’m releasing this. Gave up November 16 2010.
Download

8. RogerBot
Don’t ask me why I made this. It was just made. It’s an attempt at an AI that talks to you through .NET’s computer-talking API. It was pretty obvious that it was never going to work, but fun nonetheless. Just the debug build is included in the ZIP. The DLL included is needed to communicate with the native API so you gotta extract that too. Abandoned March 13 2010.
Download

9. Project 24
Long story behind the name. This was a question/answer knowledge base forum thing software built in PHP/MySQL. The structure is so poorly managed and I’ve lost the database structure so all I can give you is a screenshot of the control panel of it (probably the only working page). Abandoned July 5 2009. 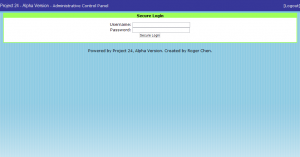 Admin CP that was made for this project.

10. Message Wall
This is pretty much my version of Google Wave, made a whole month before Wave was even introduced. I wanted to integrate email and internal messages in very much the same manner that Facebook is planning and Wave has already done. At first, it looks decent, but it turned out to be way too much work and beyond the scope of what I could do. I ran the code through apache and all I have is a screenshot because the database structure was lost as well. Built in PHP/MySQL. Abandoned April 12 2009. (Wave came out in May) 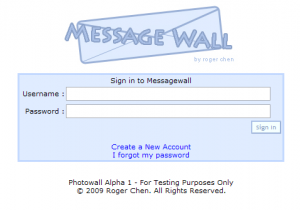 The login screen for Message Wall.

Here’s a screenshot that I took while actually working on the site a few years ago. Yes it looks a lot like GMail because that was just the best thing ever in 2009. One look at the picture will tell you how old it is. 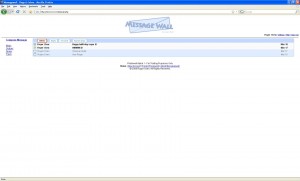 11. TypeMaster
A program that measures how fast you type. I think I released this once before, but here it is again. Written in VB.NET. Settled for on July 8 2009. (I can’t say finished because, well, read the top part if you haven’t.)
Download

12. Boggert
The blogging program that ran RogerHub for its first year until I switched to WordPress. Man that switch was just great. But nonetheless, Boggert was my 2nd biggest project at a towering 7000 lines of code and it made me pretty happy during the first few moths RogerHub was online. Built in PHP/MySQL with heavy coding in JavaScript, components in Flash, some XML for configuration, RSS/ATOM if that counts, and basic web HTML/CSS. By the way, HTML/CSS was implied for every web-based application that I write, obviously. No source because it’s embarrassingly messy. This was in progress from July 25 2009 to November 12 2010. 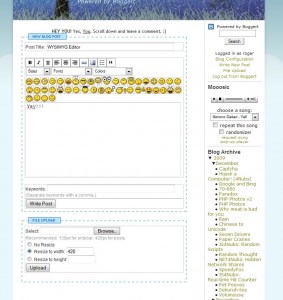 I think this image captures it best.

13. NHSWeb
I made NHSWeb over Summer 2010 for NHS so that we’d have an awesome website. Even though it was pretty recently made, there were a lot of initial structuring and design errors I shouldn’t have made. First of all, I should have picked a database system that was faster. Even hashing and file serialization might have been faster. I put in most of what I wanted, but really, this project only made some progress because I was obligated to finish it. Otherwise, it would have been dumped along with the rest. At first, NHSWeb seemed so easy, I mean this was the prime example of a project that requires no experimental technology and no innovation. Because of this, NHSWeb was actually fairly complete compared to some of my other projects. Though, in the end, I had to do some research about scalability and large-scale deployment and HUGE time-wasters with email especially stupid Yahoo. This was built in PHP/MySQL. Started May 1st 2010 (I chose an easy date on purpose, listen up politicians/leaders and benefit future history students of the world) and launched October 21st.
WalnutNHS

There are more projects than these, but these are the major ones. Take a look and observe these failures, then contemplate what you’ve accomplished and compare. There’s not so much to complain about now is there?

you're an absolute legend

Hey Roger this was really well written and i feel like since its been nearly a decade since you wrote this post it would be interesting to see an update on how you feel or how you may have changed since writing it?

Roger: Haha wow. I hardly remember writing this, but it’s safe to say that I finish a lot more of my programming projects now.

Hey Roger. I am currently in high school and studying for a test the day before. I didn't want to study so I came here and now I am surfing the web. That's it. Leaving a comment here just because I want to. Thanks Rog.

if you wanted Roger to respond than you would have asked a question or said something meaningful :)

you slay me rog