There’s a big idea that people have where, if you don’t share your pictures now, they’re gonna get lost forever. Why do people take pictures anyways? This reason has definitely changed over time. Before, if you were rich and famous, you would hire some artist to come paint your portrait, just to make sure everyone knew you existed. Then there was the period where people would all stand in rows with their family members with blank expressions and hire the photographer to take the family photo. Now, that’s not the case. Some people photograph to document their life, or maybe to relive the moment some other time. (Hah, I used a noun as a verb) Some people take pictures because it’s part of their job as a designer or reporter or something. What about like vacation pictures? Those are rather stupid. You can look at them yourself with the whole document-your-life fad or you can show them to people who really don’t care what you did on vacation. People like looking at pictures because they either make them laugh, cry, or think. The same thing applies to blogging, more or less. Sure, you can take pictures to make people laugh. That’s nothing new. Sad pictures are fun too. It’s the whole, let’s inspire emotion in random people that’ll see our deviantarts. Of course, the reason people do anything is to gain additional utility, well according to econ anyways. Then, what utility do people gain from photographing their vacations? Scratch that, even if it’s something more common like documenting a party with photographs. There’s only so much extra joy you can derive from reviewing your own photos, provided that you were fairly sober at the time you took them. One of social media’s biggest promotion points is photo-sharing. Why? Well two reasons. One, you’re trying to share the joy you personally got from looking at the picture and two, you believe that it’s imperative you document every segment of your insignificant life and that you also share your pointless pictures with everyone else. After all, what’s the point of taking pictures if nobody’s gonna see them? As hard as you think about this idiosyncrasy, there’s no explanation for it.

I saw this website portfolio design once. It was for a web-designer in his 20’s and he had this screen-filling, gothic-style, full-body picture of himself with this awesome hat on a #000 background. That was the right half. The left half had the usual contact me, here’s stuff i made before, haha look i use all lowercase letters to show i’m hip and stuff. Then, I think: he probably had this picture taken knowing that he would incorporate it into his website design. He’d get all dressed up and go to some photo shoot to get this shot done. Then he’d crank out this brilliant design with the picture he chose from the hundreds he took at the studio, and hey, this single picture I’m looking at is different than the picture’s we’re used to. This is a picture to show his owner exists. He went to all those hours of trouble, setting those magnetic bits in this particular fashion, just so people in the future would know he existed.

Now, I present to you a block of data that, when interpreted a certain way, bears resemblance to my image. 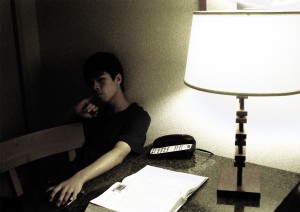 Hah, I tried doing that grunge-style thing, but really this picture is way out of character.

I like that picture of you by the way.You’re so posed and the lighting makes you look well, mysterious. There was another phrase that I wanted to use, but...it’s not very appropriate.

Hah, see the physics book on the desk? Not really.

You say that, yet I’m sure you spent SOME time trying to pose like that, and getting someone to take the picture for you, or using a timer...