Google+
Written by Roger on Aug 28 2009 as uncategorized.

Edit: I wrote this post two and a half years ago. It is no longer relevant. Please don’t read it.

Just like the cables underneath your desk, things on your hard drive have a tendency to get tangled. Files fragments are scattered and things get harder and harder to find.

Thankfully, Windows has come with its very own Disk defragmenter since Windows 95, but many (faster) alternatives have been made available to the public.

In this review, I will be comparing AusLogic’s Disk Defrag and Piriform’s Defraggler. 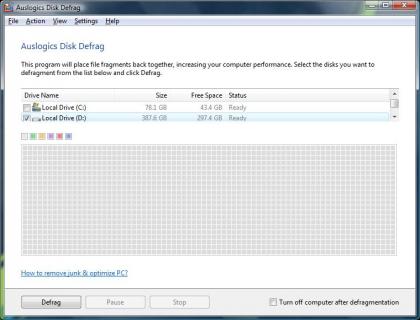 Auslogics Disk Defrag features a minimalistic design. At the top, your disk drives are listed alphabetically by their drive letters. At the bottom, the selected disk is displayed as a grid. 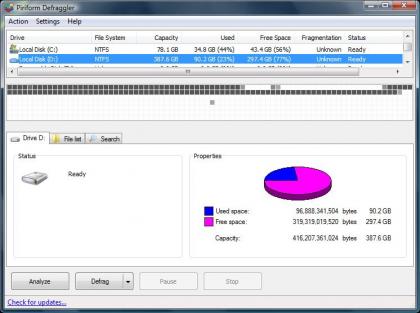 Defraggler’s User Interface is very similar to that of Auslogics Disk Defrag. Drives are listed at the top; a grid is show underneath it. However, Defraggler also shows information about your disk including

In addition, Defraggler’s window is smaller and takes up less space than that of Auslogic’s.

The program with the best User Interface is
Defraggler

Functionality
The primary purpose of a Disk Defragmenter is to defragment files, however, other functions are always nice.

Auslogics functionality is rather limited and simple. Both Auslogics and Defraggler have the ability to defragment single files or folders. They also include options for scheduling defrags and excluding files. But besides these basic functions, AusLogics has very little else to offer. 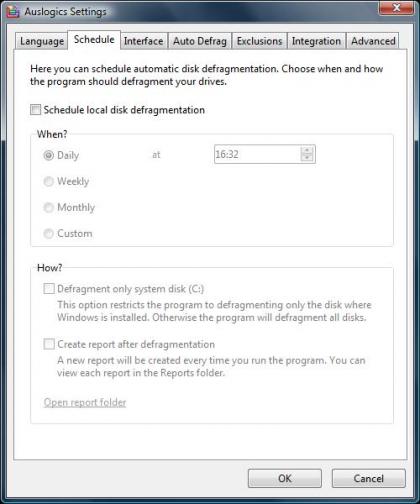 Disk Defrag’s settings are simple enough for anybody to use, yet customizable to suit your personal needs.

Defragger is teeming with extra tools and options that provide much greater functionality.

Defraggler has a simple search engine to find files on your computer. Their search lets you input both filesnames and sizes to search for. 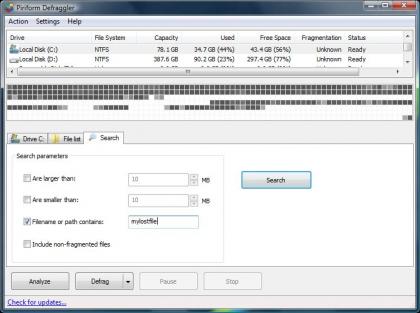 Defraggler’s Scheduling options are almost identical to those of Auslogics Disk Defrag. Whichever one you choose, you shouldn’t have any problems scheduling automatic Disk Defrags. 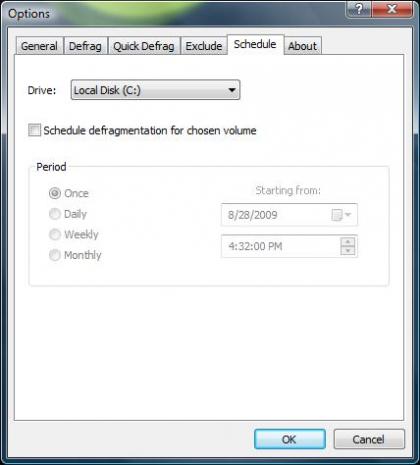 In terms of Functionality, the clear winner is
Defraggler

Performance
Whew, that was a hard word to spell. It took around 4 times to get “performance” right. One of the most important parts of a Disk Defragmenter is its performance while cleaning up your files. Windows’ built in defragmenter is sluggish and slow. In addition, it takes a great deal of CPU Power and memory to finish a defragmentation, not to mention the bizarre disk activity involved.

In terms of perfomance, I decided to run a little experiment. I ran both Disk Defrag and Defraggler on identical folders of extremely fragmented files.

So, not a big difference, but Auslogics came out a few seconds ahead.

The winner for the Performance Test is
Auslogics Disk Defrag

I personally use AusLogics Disk Defrag most of the time, as it gets the job done faster. But, Defraggler’s extra funcions and nice GUI are nothing to laugh about. Take your pick~!

Found a public board

Good luck to future generations who find this. May the earth rest lightly on you.

Hey Roger, are you doing ok?

As you asked, I did not read your article. :D now gib me cookie or die tmr

Over the weekend I bought black crocs. They are men’s size 9 (Or woman’s size 11) They are black and I can’t wait to wear them! I even got the things you can attach to them!

How did I get here?

After scanning a lot of your comments Roger.exe, I've noticed you comment "Haha" a lot. So the real question is are you a bot?

you're not my mom roger, i'll read what i want
(nice article btw)

I applaud. You should be proud of all your work, no matter what. If not, your whole fanbase will support you and be proud of you.

Why are you ashamed of this wonderful article? It isn't relevant now but it once clearly was. Maybe. I wouldn't know.

Hi there. Thanks for the helpful criticism. The full timestamp of the post is visible when you hover over the "August 28th" date. It appears as a tooltip because of the title attribute. I wrote this over two years ago, and the direction of this blog has since changed.

For one thing, I no longer use Windows, and furthermore, I don't write product reviews or anything of the like anymore.

I'm sorry if this review offended you or anything, I was 14, and it is rather shallow. Thank you for your patience.

It would be courteous for an author of a review to note if they are testing or comparing freeware or payware versions. This author might've been mixing freeware with payware. For example, Piriform's Defraggler does NOT provide a scheduler. You have to run their df.exec from a command line and add it as an event in Task Scheduler. Of course, Windows own Task Scheduler is far superior to the one provided by either Auslogics or Defraggler.

There was omission of several feature comparisons between the Auslogics and Piriform defragmenters. For example, Auslogics says it will move normal files out of the MFT reserve area. When disk space is low, this reserved area (it's reserved for later use, if available, not allocated solely for use by the MFT) will be used for normal file storage and not be available to the MFT as more files are added hence fragmentation of the MFT. By clearing the MFT reserve area of normal files, further additions to the MFT will be contiguous instead of fragmented. The idea is to prevent future fragmentation of the MFT. This feature is missing in Defraggler (both freeware and payware versions). In fact, there is little feature-by-feature comparison in this review, just what the author happens to touch upon for his personal and limited use of the product(s).

Another missed feature is Defraggler can be scheduled to perform a boot-time defrag (in its freeware version). For Auslogics, you have to buy their payware version to get that feature. Defraggler can be configured (a global option, not a setting per defrag job) to run in normal or low priority. This prevents the defrag operation from interfering the use of your computer due to impacted responsiveness while defragmenting. This is a global option and not settable via command-line switches when using their df.exec to run scheduled defrags using Windows' Task Scheduler. If you only defrag using scheduled jobs (for when you won't be at the computer) then you'll probably want to leave priority at normal.

Tis a pity that blog-like reviews, like this one, don't bother putting the year in the time stamp. It's Feb 2012 as I write this and have to guess that the Aug review was performed in 2011 to omit having to show a year in the time stamp. Otherwise, this could be a really old review - especially since the revisions of the products was never mentioned - and features were changed since then. Without proper date stamps and the omission of product versions, readers really have no idea if the comparison is of value.

The freeware versions of both are adware because both default to installing foistware (software bundled in the installer), like the Google Toolbar (Defraggler) and Ask Toolbar (Auslogics). Be sure to do a custom install or review the installer's screens so you DESELECT this foistware during the install.

This turned out to be a lightweight overview review and not of much value for users that want an in-depth comparison between these products. They are close competitors so more should've been covered on each product to compare against the other, plus it really does matter if the freeware or payware versions were being compared as many features are missing from the freeware versions.

Thank you!. This comparison made it very clear, on which one I chose as my defragmenter. And I'll go with Defraggler, just cause it seems to be more efficient and in functionality. That's what I looking for on a Defragmenter to do the job well, not to do it fast!.

The performance test really isnt valid... just because one does it faster doesnt mean it does it better... not only is defrag time important but improved drive/file speed/access after?

This is exactly the information I was looking for. Thanks for the comparison!

Those 2 are REALLY hard to compare to each other..I’m glad someone did something like this...

Great! I was looking for a comparative like this. Thank you :)