Google+
Written by Roger on Jan 1 2010 as uncategorized.

So, over the past 2 years, two social-networking sites have fought the way to Alexa’s TOP 100 Websites. I’m talking about Facebook and Twitter of course. (You can see the whole list at Alexa’s Top 500 Global Sites.)

Facebook fought and won against Yahoo for the #2 spot in August 2009. In just 5 years, Facebook has gathered 350M users (most of which are students under 34). Some people are speculating that Facebook may oust Google from the #1 spot in a few years.

Twitter has been gaining popularity steadily, with a sudden increase in Q2-2009. It now stands at #14. Twitter, on the other hand, has more users in the 25-44 year age range. (more adults)


People are eager to connect with other people and Twitter makes that simple. Twitter asks one question, "What’s happening?"

But what’s the point? Their 140-character limit keeps you from saying any more than "I’m eating lunch at McDonalds" or some other useless information. 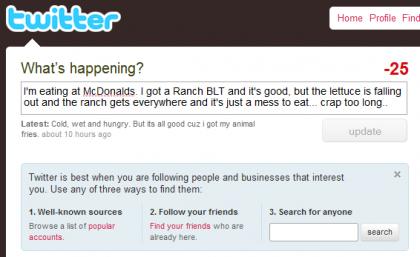 So, what exactly does Facebook do? I still don’t get it.

I tried asking people that use Facebook a lot, but they don’t seem to know..

Is it communication? Well, I don’t see how using a website is more convenient than texting or calling people. If you’re looking for a longer conversation, instant messaging and video chatting are much easier to use than Facebook.

I’m not even gonna mention the games..

Maybe it’s because Facebook is very widely used and you’re sick of answering "no" to "Do you have a Facebook?". Slowly, "facebook" as a lowercase noun is worming it’s way into our dictionary.

Image sharing is also a big thing in Facebook. Not only can you look at other peoples’ pictures, but you can search for pictures that include you in them. Because you just love looking at pictures of yourself, right?

Lots of people plan events on Facebook. They say that it’s more convenient than email and IM’ing, which is probably true.

"Some people think that Facebook should only be used to make contact with people they know well or people they know would be happy to make their acquaintance online. Thankfully, those delusional souls are a tiny minority. The majority of people on Facebook make as many friend requests as possible, as though accumulating large numbers of online friends were some measure of social desirability. Hence, most of us have [friends] that we [haven’t] seen in years, [can’t] be arsed to contact otherwise, and possibly [wouldn’t] greet on the street unless eye contact was completely unavoidable."
Quoted from CynicsUnlimited - Source

I don’t know whether or not a large number of friends on Facebook gives you lifetime satisfaction or not, but if you’re using Facebook just to feel more confident about yourself... I don’t even know what to say.

(If this offends you, tell me and i’ll take it down.)

And what’s with the poking thing? It’s like "I’m too shy/lazy/mysterious to say anything so I’ll just poke you instead." I don’t get it..

It’s is pretty good at stalking people. For example: You meet someone on the street and find out that they’re a senior at North Hills HS (entirely fictional). With that information and their first name, you could probably find out all about their hobbies and friends.

So, Facebook is good for finding long-lost cousins (lol) and chatting with people you meet on the street. But, then again, that idea isn’t entirely unique to Facebook either.

Technical version:
Both sites have openly available and well-documented (ahem) API’s (Application Programming Interface). API’s are especially important because they let programs connect with each other.

API’s let people create iPhone apps and websites like Meebo that can work seamlessly with the rest of the network.

But unlike Facebook, Twitter’s API is actually useful. Twitter consists of mini-blog posts that can be accessed using the Twitter API. On RogerHub, I use the Twitter API to show you my recent tweets on the sidebar. >>

Although Facebook’s API is every way as detailed and flexible as Twitter’s, making programs for Facebook just isn’t practical.

Dummy version:I can put my tweets from Twitter in RogerHub’s sidebar. So, what part of Facebook am I supposed to put in the sidebar? -_-

I think that there’s a Profile Badge or something like that. You can assemble your information and make a badge for your blog.

There’s also a gift-sending thing where you can send virtual gifts to your friends... It might save you the time and money that it takes to buy (or make) a real gift, but you’re also telling the recipient that you really don’t care about them.

Facebook itself is too hard to reproduce. There are a lot of alternate Instant Messaging clients like Pidgin, Trillian or Miranda. Twitter is even easier to replicate. A ton of websites can send and recieve information from Twitter (rogerhub included). But there are no Facebook-alternatives that you can use to post or manage your account. (which is one of the reasons why Facebook.com ranks so much higher than Twitter)

Yeah, so I tried Facebook. A few hours later, I opened Outlook to check my email. You can probably guess what happened.

It took me another 5 minutes to figure out how to turn off notifications.

Then, there was no "un-select all" option. Facebook doesn’t want you turning off their notifications... So, I unchecked the thirty-something check boxes using my awesome keyboard-shortcut skills (tab + space + tab + space etc...) 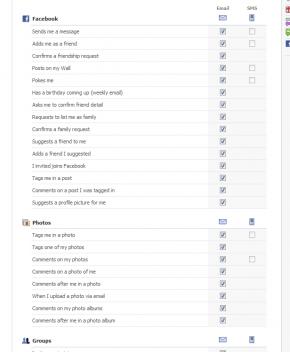 Both Twitter and Facebook have the "Stalk people you stalk on other networks!" thing where you can import contacts from email or Instant Messaging programs. (Done using the API’s that I explained earlier.)

That part’s pretty cool. And believe them when they say that they don’t save your passwords. They really don’t.

So, I use Twitter because it links with RogerHub pretty well.

Here’s how it goes:

I text something to 40404 and my message goes to Twitter. Twitter sends it to RogerHub, and the it shows up under the "Twitter" section of the sidebar.

Besides this point, Twitter is pretty useless with communication. There’s no practical way to have a conversation on Twitter.

But often times, Twitter can report news faster than TV. Twitter’s homepage shows what people are twittering about up to the latest minute, which is pretty cool. 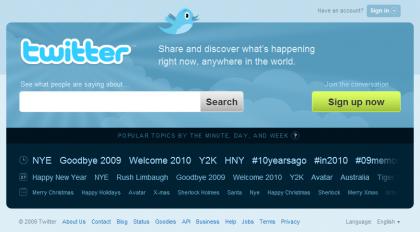 So, nothing note-worthy in particular, but it’s interesting nonetheless.

As a service-combining type of website, Facebook is very convenient. But using separate services for communication, photo-sharing, blogging, and stalking is a lot easier. Of course, there are certain cases where Facebook might get your message across faster, but that doesn’t happen to me very often.

I’m writing this post because of the Facebook/Twitter phenomenon that has occured in the last two years. They’ve come onto the Worldwide Top Sites in just a few years, so they must be doing something right.

So, now that you’re done reading this, disregard my opinion and keep using Facebook/Twitter like you’ve been doing all along. Well, you were going to do that anyways. Am I right?

(I stole the picture from InterfaceLIFT. LOL)

Happy new years ~!
Yay its 2010!! I finally get another year on my blog archive.

Next: Helloooo Previous: Plants vs. Zombies

and Fan is a bit scary-the MV.
but it’s still a good song, nonetheless.
Is nonetheless a word? >_>

love love love~i have the mv on my itouch :D
as well as one minute one second.
EPIK HIGH!
almost as good as super junior, lol.
just kiddings.

Hey, it really isnt that hard, it starts with a E minor arrpeggio/chord, and then an f# minor, and then something. I keep getting the song mixed up with "love love love", so it might not be right

I love that song ;)
and i love it when Jeremy plays it on the piano, but he won’t give me the sheet music, because apparently he didn’t NEED to get the sheet music.
=_= he’s just that "good"

Yeah, i heard that somewhere.
But the specification says the limit is 160 ._.

you know the twitter 140 character limit is because most texts are limited to that and twitter is usually updated by texting.

kenny : I changed it.

allan : I found a site that continues music as you change pages, but they use AJAX and a lot of JS scripting to get content... which is too much work for me ;)

oh btw, my blog changed to iamnotjamesh.co.cc
Please update your side thingy and delete this if you want :P

who in the world is posing as me? Roger please delete the kenny one because I obviously go by iamnotjamesh.
btw, this post is freakin long. I didnt read all of it

GAWD. THE UNCHECKING NOTIFICATIONS/OPTIONS/IGNORING INVITES ARE SO FREAKING ANNOYING D<

Yeah, kenny. You would know

the answer to your question:
Q: "What is Facebook?"
A: "stalking made easy"
its obvious