Google+
Written by Roger on Mar 3 2010 as uncategorized.

When I see a Tumblr, I think: what’s the point?

A picture of a bear hugging a tree; a lame quote from your math teacher. Does it really mean anything? Content is generally the same across multiple tumblogs.

Tumblr’s not a bad thing; it’s neutral at best. (for lazy people)

But maintaining a blog just means so much more.

Blogger, Wordpress, or even custom programs like Boggert. Layout-making, post-planning; Compared to real bloggi- actually, it can’t even be compared.

Web designing is an art-form that people rarely notice. The 20 preset-blogger themes are nice, but not personal. Blog templates themselves can take hours to create; it’s so easy to get sidetracked. *ahem* Innovative, novel designs that stretch the limits of CSS3 require actual planning and actual work.

Websites that make blogging "easier" are great; however, blogs that are "easy" have no actual meaning.

The fine line between blogging and pseudo-blogging is control. How much control a blog software gives you, and how extensively a blogger controls it.

Blogger is awesome. Why? Google’s got balls not only for allowing full HTML control over blogs, but also for providing a PHP Scripting environment to all of their bloggers. You really can’t get more controlling than that.

Design is time-consuming. But layouts aren’t everything.

Saturday night at small group, I was helping a friend launch his new Blogger blog (which I hope to see active soon *ahem*). He literally spent over 5 minutes figuring out the first two paragraphs of his first post.

You might have an uncontrollable brain-hand typing scheme; typing paragraphs comes as naturally as conversation. But most bloggers will respect the rule of TLDR.

If something’s too long, nobody wants to read it. Proving your point in the shortest way possible; dry humor without it offending anyone; constant checks for grammar (not really), structure, and most of all, purpose. It’s almost like an essay..

Is blogging productive? Maybe. Webster says productive means "yielding results, benefits, or profits". I don’t get much profit from my blogging, but RogerHub yields a lot of results.

Blogging actually helps me think of words and phrases to say what I mean on the spot. It’s actually helping with writing and even conversation in general.

Other people tell me things about stuff I put on RogerHub. The love calculator, huge wastes of paper, funny internet memes. I can trace it all back to RogerHub.

A professional blogger told me about an interesting experiment he did with his blog. Adding trackbacks, social networking icons, a top-posts widget; things that are inscrutable to tumblr users.

I really wish people would recognize the value of blogging and why sites like Tumblr are doing it wrong.

Yeah this clip is a bit long, but if you have time, watch it. WATCH IT :)
It makes me wonder how the guy who writes xkcd feels.. 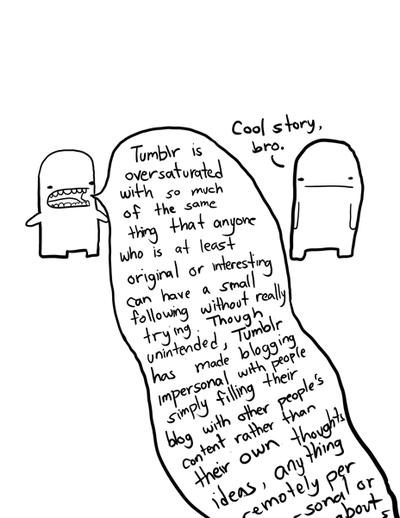 google translator Type in "lick". Translate it into Arabic. Copy the third one down in the verb column. Paste it into the area where you type. Translate it to English. I laughed. (props to waverly)

beyond awesome.
Next: Passion Previous: Pulse

i think the point of tumblr is to be simple and fast. i don’t see anything wrong with it. some people probably don’t want to spend the time making a fully customized blog or don’t really mind.

i don’t understand your argument about blogs...

=D *feels special since she was included in so many things in this post.