Google+
Written by Roger on Jan 24 2011 as philosophy, commentary.

Why are streetlamps yellow? Perhaps it flows with white headlights, green traffic lights and red taillights. Maybe the lamps brighten the alleys to deter crime. Or maybe the most economic bulb available just happens to be naturally yellow. Someone, sometime ago, had to engineer this, and he certainly did it with brilliance because streetlamps are so widespread today. So why did his plan of action—yellow sodium street lights—succeed? It was because his idea worked. It was his engineering genius, diligence, and spot-on prediction of unintended consequences that gave him the power and influence to implement his idea. With the onset of this new age, that isn’t true anymore. Take the story of Mr. Streetlamp one step further: his idea became widespread because people listened. People, both technically educated and not, listened because his ideas made sense. But made sense to whom? Here’s the key point: the entirety of his peers could not imagine any better alternative to his plan. When the entire group agrees, cooperation is at its apex, and all is well. But then advertising was invented: worthless content whose only purpose is to persuade. Advertising appeals not to the logic and rationale of the engineering mind, but to the whimsical spirit of emotion and the vulnerable center of psychology. Today’s products are successful not for their actual worth, but for their marketing. Somewhere in history, someone realized that innovation could be feigned as long as ideas are presented correctly. Modern power and influence lie not with the greatest brain, but with the most persuasive rhetoric. For Dr. Mark to attain success in this era, he must research sociology and language rather than engineering and science. This shift creates an inconsistency: today’s ideas succeed not because they are truly inventive, but because they merely sound good. Mankind is usually self-correcting. Where there is a fault, there are rebels to expose it. And as a result, everything has been fine so far. 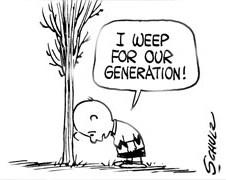 Hi Roger!
I'm passing time right now by going through your archives.
You have some really great content that deserves way more attention.
It's cool you're so successful and in all your busy schedule you still find time to respond and read all your comments! Much respect man.
I hope that I can be just as productive and impactful once I get into college next year.
Keep doing you! You're amazing! God bless.