Google+
Written by Roger on Sep 9 2009 as uncategorized.

Intro
Do you ever wonder how warm your computer is? Feeling the case isn’t a good indicator, and taking apart your PC while it’s running isn’t a smart idea.

Computers overheat just like cars. If you run too many programs on your computer without adequate cooling, a computer may heat itself to the point where it is automatically shutdown to prevent damage.

Usually, you can check your computer’s temperature using the Bios, but that method doesn’t work if you planning to use your computer.

SpeedFan
Speedfan, a program developed by Almico, can be used to check your PC’s temperatures directly from Windows. 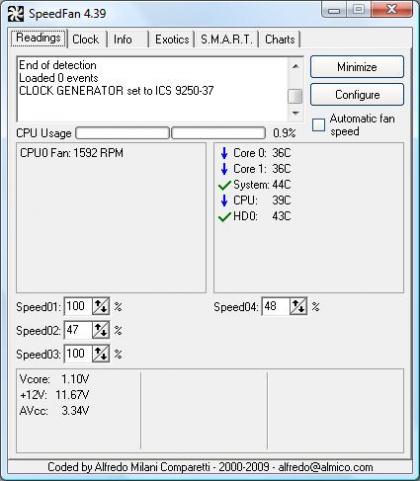 Different parts of your computers usually have sensors that detect temperature. These sensors can be on your CPU, Power Supply Unit, Motherboard, or even your Graphics Card. Speed fan will put together this nice chart of temperatures for you to look at whenever you want.

If you look to the left, you’ll see a list of the fans on your computer. For the most part, fans control the airflow in and out of your computer. The more fans you have, the cooler your computer will be.

Although high-speed fans can move alot of air, they also create alot of sound. SpeedFan gives you controls to change the speed of your fans. You can speed them up to bring in more air, or you can slow them down to dampen their sound.

Options
Everyone likes options. SpeedFan gives you lots of these to simplify your temperature management.

The first thing you probably want to do is to change the scales from Celsius to Fahrenheit. (Or vice versa.) 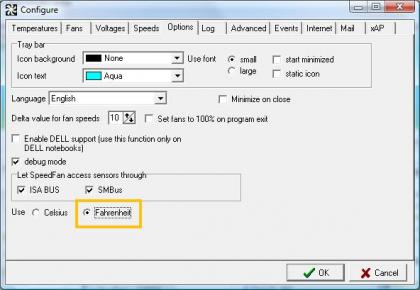 If you don’t like opening the window too often, you can also put your temperatures right on your taskbar.

SpeedFan also gives you information on the RAM and hard drives installed in your computer. If needed, this information can help you debug problems with your hardware.

SpeedFan can sense your harddrive’s S.M.A.R.T. information. It can display this information both inside the main window, and as a online in-depth report. 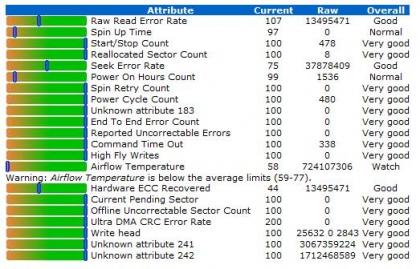 SpeedFan updates its hardware-sensing magic very often to keep up with the latest in hardware parts. SpeedFan supports both 32-bit and 64-bit systems, as well as both SATA and SCSI harddrives.

What should my temps look like?
Temperature ranges vary depending on the type and model of your hardware parts. If your temperatures are all below 50C (122F), that’s normal. Anything above 70C (158F) is a problem. Normally, computers will shutdown at around 90C (194F).

It’s only fair to warn you that SpeedFan has features that should only be used by power users. Careless operation of SpeedFan’s options might harm your computer.

If you’re convinced, you can download SpeedFan at http://www.almico.com/speedfan.php.